This is a poster that I created for a poster design class I took in the Fall 2012 semester at University of Baltimore. The design was for an event called “The Samaritan Project”, with readings honoring the victims of human trafficking.

The project brief required that any illustrations should be symbolic – while the subject matter is admittedly dark there should be some sort of hope being shown.

After cycling through some ideas I eventually came up with the idea of a single white rose standing defiantly on a dark, barren landscape.

I wrote down what I saw in my head then did sketches. Here’s the concept –

A dark, barren, broken, empty landscape – alien, like the surface of mars, or hell – picture Mordor in the lord of the rings. The sky is dark, full of menacing clouds. The ground is cracked and broken, and the cracks spell out (creepy) phrases. The entire image is dark, black, dark greys, and splashes of red punctuating and emphasizing the cracks in the ground.

Rising out of this dark landscape, in bold defiance, and contrast, is a single flower. A white rose, in bloom. Symbolizing love, purity, virtue, honor, and hope – spiritual states which transcend the physical. The rose rises boldly into the the skyline, it is the focal point, it is centered, it is a woman, she is a survivor, her purity and strength of spirit transcends physical transgression.

Visually the blooming rose will be the letter O in the word hope, with the remaining letters hand drawn and rendered similar to vines, but in a translucent white.

The cracks in the ground will also be hand drawn, and rendered as the dark survivor testimony. They will be chaotic, going all over the place, breaking the ground up and forming pits, illuminated by red below.

The image will be set in portrait, fading to all black at the bottom, where in a white, classic serif font will be the title – in caps – THE SAMARITAN PROJECT – break – Readings honoring the victims of human trafficking (mixed case) – break – tertiary info. 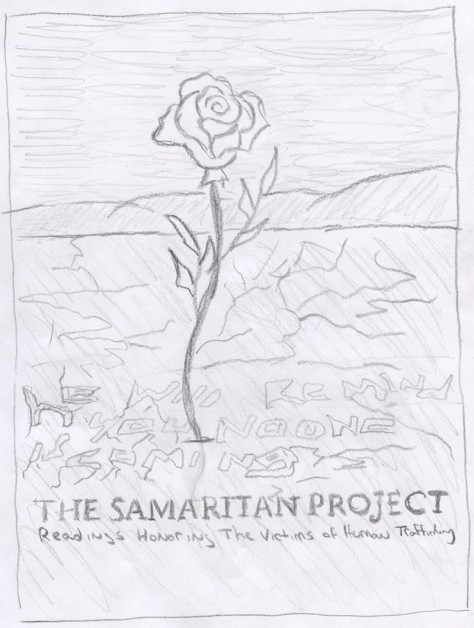 I considered using other flowers, most notably the eglantine rose, which symbolizes “a wound to heal” – but I decided against it because I wanted the symbolism to be spiritual and entirely positive. Something to stand in absolute contrast to the horror of human trafficking.

Here’s a couple of shots of the work as it progressed. I used a combination of tools for this project – Pencil and paper, Cinema 4D to help get the perspective correct, Adobe Illustrator for building the flower, and Adobe Photoshop for coloring, texture, and mood. 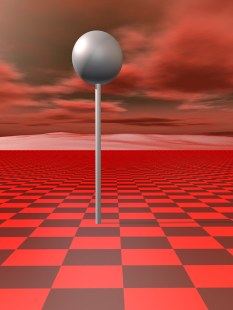 Drawing out the cracked ground 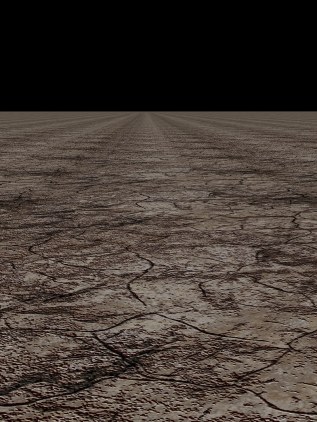 The only conceptual draw back I found with the white rose was that it is associated with funerals – regardless, the white rose represents grace, dignity, reverence, resistance and non-violence, so I decided it was fitting as a symbol of hope and resistance for both the survivors and for those who did not make it. 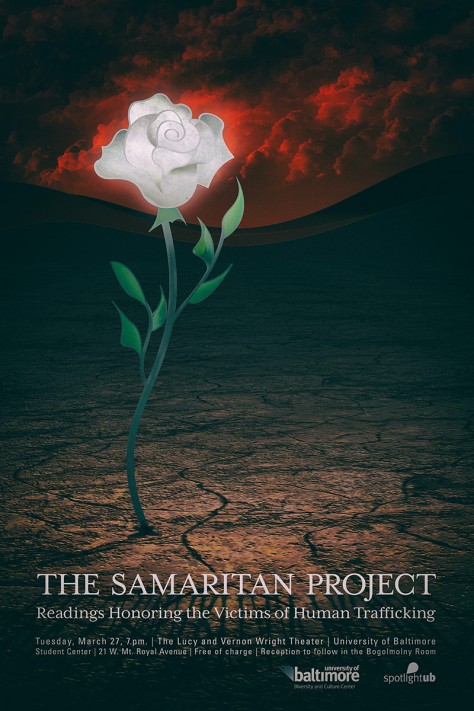